Abstract Structures in Mathematics and Music

December 06, 2021
These are notes for my online discussion with Georgian Student Parliament on Tuesday 7 December, 2021, organized by Nina Tsatsanashvili. All photos in this post are from Wikipedia.
If you look up the word "structure" on the Google Dictionary, you will find the following definition: the arrangement of and relations between the parts or elements of something complex. When the "parts or elements" are subject to specific interpretation, we have at hand an "abstract structure". For example, consider a painting, which can be seen as an arrangement of colors. For instance, Leonardo da Vinci's Mona Lisa:

This is not an abstract structure, since its constituents are specific colors that can be found on a specific poplar wood panel that currently resides in a gallery of the Louvre Museum in Paris. In contrast, Ludwig van Beethoven's Für Elise is an abstract structure, since the sounds that make up this musical piece are dependent on the interpretation of musical performer of the piece, as well as the instrument on which the piece is performed.
In this sense, abstract mathematics is similar to composition in music: in both cases one builds structures that are inherently abstract. The analogy goes further: a musical performer can be compared to an engineer, for instance, who produces concrete structures by means of concrete interpretations of the abstract mathematical structures. 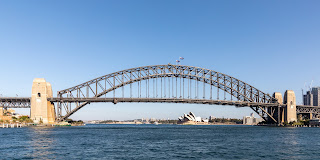 In fact, the analogy goes even further than that. A completed piece of work in music, that is, a musical composition, is analogous to a "mathematical theory". A mathematical theory is an exploration of one or several special types of mathematical structures and their interrelation, similarly how in a musical composition one explores one or several types of musical structures and their interrelation. In both cases, abstract structures often organize into more abstract forms.
As an example of a form of abstract structure in mathematics, consider the following diagram: 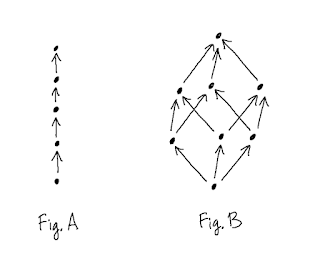 This diagram displays two mathematical structures, given by Fig. A and Fig. B. Each of them are abstract structures in the sense that the points and the arrows in each structure are subject to interpretation. The two structures have a similar form: they are both made out of points and arrows. Such structures in mathematics are called directed graphs. A mathematical theory that explores various different types of graphs and their interrelation is called graph theory. Graph theory, however, is not only about directed graphs. Other mathematical structures are also part of the theory, such as natural numbers, for instance. They arise by counting various different phenomena dealing with graphs: for example, by counting how many trajectories connect one point of the graph with another.
Similarly, in a single musical composition, there is one (or several) main forms of musical structure, whose different manifestations are being explored, along with their interrelations, in the composition. What is the main form of musical structure in Für Elise?
discussion ideas phylosophy