These are notes for a colloquium talk to be given at NITheCS.

The Snake Lemma from this fragment of a 1980 film ("It's My Turn", starring Jill Clayburgh and Michael Douglas), along with many other similar theorems in abstract algebra, known to be true for a variety different algebraic settings, can all be established in a unified setting of noetherian forms. This post attempts to give a preliminary step towards a possibly ambitious goal of applying noetherian forms outside abstract mathematics. In this light we propose a variation of this notion, a "noetherian information system", which is intended to be more agile in terms of identifying applications.

By a network we mean a web of devices and directed binary channels between them ( = a graph in the sense of category theory). An information system over a network consisting of just one device and no channels, is a collection of information clusters, where some clusters may be parts of others. 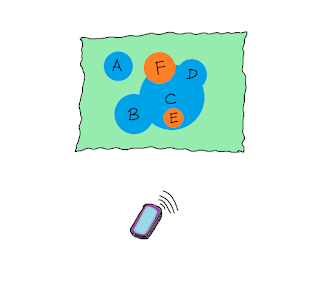 The picture above describes an example of an information system. The device is a cellphone. A cluster is an approximate GPS location of the cellphone. Six clusters are displayed above, marked by A, B, C, D, E, F. The blue clusters represent GPS locations measured at different times on a given day. The orange ones represent GPS locations measured on another day. In general, the idea is that information clusters in an information system are all possible data that the device is theoretically able to capture/process.
There are two ways to interpret the meaning for a cluster E to be part of a cluster C:
The general notion of an information cluster is an abstract one, as is the notion of one cluster being part of another. We only require that "is part of" relation between clusters is reflexive, antisymmetric and transitive.
A transmission from one information system to another maps each cluster in one system to a cluster in another system, so that if among two clusters, one is part of another, then a similar relation will hold for the mapped clusters (this property is called monotonicity of transmission). An example of transmission is calculation of distance range to a pinned location, based on the approximate GPS location of the cellphone. 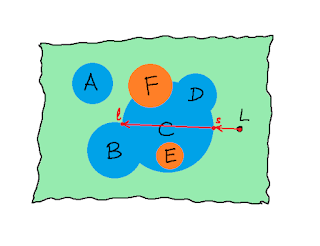 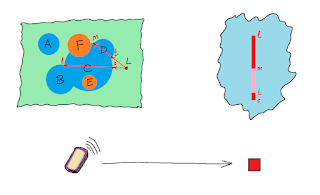 In an information system, given a finite chain of channels

Consider vector spaces as devices. Define a channel from a vector space V to a vector space W to be a linear map from V to W. Declare an information cluster to be a subspace of a vector space and declare one cluster to be part of another when the first subspace lies inside the second one. Transmission of subspaces is given by direct image of a subspace under a linear map. The corresponding category of transmissions is equivalent to the category of projective spaces (the quotient of the category of vector spaces, which identifies two linear maps when they act the same way on subspaces). This information system is prenoetherian thanks to the fact that the category of vector spaces is an abelian category. The required decomposition of a transmission is given by decomposition of a linear map as a quotient map, followed by an isomorphism and followed by subspace inclusion. The isomorphism in this decomposition is guaranteed by Noether's First Isomorphism Theorem.
Vector spaces here can be replaced by many other group-like structures. More generally, semi-abelian categories give rise to a prenoetherian information systems similarly to how abelian categories do -- once again, relying on Noether's First Isomorphism Theorem, as well as a few other important "exactness properties".
It has been recently shown that we can even consider a prenoetherian information system where the transmission category is equivalent to the category of sets. Devices in this example are sets. Channels are functions between sets. An information cluster partitions the set into equivalence classes and either distinguishes one of the classes or not. One cluster is part of another, if each equivalence class in the first is a subset of an equivalence class in the second and the distinguished equivalence class (if there is one) in the first cluster is a subset of the distinguished one in the second cluster.
A channel transmission then acts as suggested in the following example. Distinguished equivalence classes must map to distinguished classes: so if blue is the distinguished class in the source, then in the target, blue must be the distinguished one as well. If, on the other hand, no class is distinguished in the source cluster, then the target cluster will not have a distinguished class either. The required decomposition of functions here is given again by Noether's First Isomorphism Theorem: any function decomposes as a quotient map, followed by a bijection, and followed by a subset inclusion map.
In these examples, every composite transmission is a channel transmission (which is because in each case our starting network was already a category, and transmissions were chosen functorially). When this happens, the decomposition required can by simplified to a decomposition into an output following by an input. This is thanks to the fact that inputs and outputs are stable under composition with channel isotransmissions.
In order to be able to recover all Noether isomorphism theorems in the transmission category of a prenoetherian information system (as well as many other homorphism theorems, such as homological diagram lemmas of homological algebra, for instance), we need to assume that the clusters admit finite suprema and finite infima (i.e., that information systems above each device are lattices in the sense of order theory) and that each transmission is a left adjoint in a Galois connection -- we call such information system a noetherian information system. We consider below a special case of this scenario, where clusters have arbitrary suprema and transmissions preserve them (these correspond to topological functors, whose applications in general topology have been a center of attention for many years in the research group of Professor Guillaume Brümmer from the University of Cape Town).

An information system over a network consisting of just one device and no channels is complete when any number of clusters can be, in the terminology suggested by the quantum interpretation, superposed to form a new cluster. What we mean by "superposition" is nothing other than "join" in the terminology of order theory (so, "disjunction" in the classical interpretation). Superposition of no clusters should also be possible. In this case, the result is the smallest cluster.
None of the information systems considered in the first section of this post are topological. 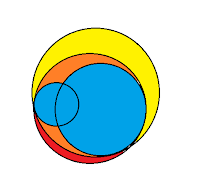 The middle symbol here is the symbol for logical equivalence. The inequality expresses that the cluster on its right side is part of the cluster on its left side. This is the familiar law of Galois connection in mathematics (written out in a slightly untraditional manner). Intuitively, the reverse transmission recovers largest possible cluster that can get transmitted into a given one.
In our example, reverse transmission of a distance range will result in the following region, which is the region of all locations that are in that distance range from the given location. 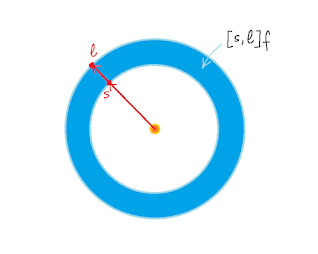 The seemingly simple law above has a number of useful mathematical consequences. We describe some of these below:

The notion of a noetherian information system from this post is an adaptation of the notion of a noetherian form from
A. Goswami and Z. Janelidze, Duality in non-abelian algebra IV. Duality for groups and a universal isomorphism theorem, Advances in Mathematics 349, 2019, 781–812.
Related references, and especially those which led to the development of this concept, can be found in the article above. In particular, it contains the following reference to the paper of Emmy Noether where her isomorphism theorems were first established:
E. Noether, Abstrakter Aufbau der Idealtheorie in algebraischen Zahl- und Funktionenkörpern, Mathematische Annalen 96 (1927), 26–61.
In the following paper, Saunders Mac Lane, suggested that there should be a unified categorical approached to isomorphism and other such theorems based on duality:
S. Mac Lane, Duality for groups, Bull. Am. Math. Soc. 56, 1950, 485–516.
Noetherian forms provide such approach. The example dealing with the category of sets can be generalized to any topos (joint work in progress with Francois van Niekerk). Keeping in mind that the notion of a topos is a notion of a mathematical universe, we see how noetherian information systems have a wide reach in abstract mathematics. This makes one wonder whether they can be found outside of mathematics as well? In particular: 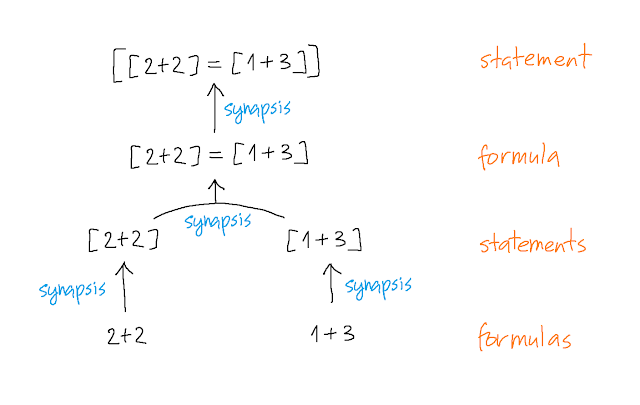