On the structure of information

A well-known metaphor: a house is not a mere collection of bricks. It is, rather, a collection of bricks that has been organized in a certain structure. Organizing information into structure seems to be something our brains are good at. What if this organization is the means by which our brain comprehends, stores, and transmits information? In other words, the structure of information is all there is. "Meaning" may simply be certain types of structure of information that our brain distinguishes from others. When this distinction occurs, the brain provides us with emotional impulses, which creates this sensation of "aha, that is quite deep". If something like this is true, then the brain ought to be programmed to recognize structure in a way that is synchronized with the structure of the universe surrounding us, since those "aha" moments led us to a point where we can make predictions about nature, communicate over a large distance, etc.

It is difficult to test out such a theory since perceived information is usually matched with existing knowledge in our subconscious... so it is difficult to isolate a describable portion of self-contained information, which would be necessary for a rigorous study of how the structure of information determines the meaning. Except perhaps in an art form, where the "meaning" is least dependent on existing knowledge, such as music.

Here is my (almost) first attempt at the study of how a meaning of a musical piece could be interpreted via the structure of the organization of its sounds. I improvised this short piece:

And then isolated various layers of its musical structure:

Each colored dot in the bottom layer corresponds to a half bar. Here is the score, for reference (bars are numbered): 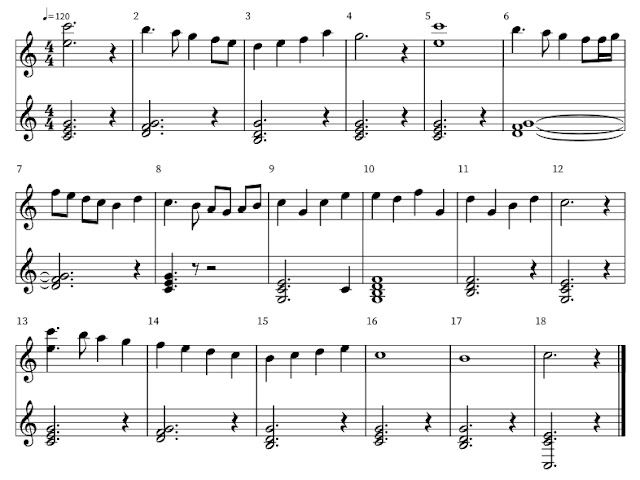 The colors encode musical similarities. For instance, notice that the fourth and the fifth bars both have a C chord in an extended half note. This is marked by the fact that the seventh and the ninth dots (from left) both have the same red color. The higher layers are combinations of half-bars again categorized according to the similarity of their musical structure. Now, my hypothesis is that when listening to this musical piece our brain generates (partially subconsciously) the structure displayed in the image above. The mere possibility of, and the easiness by which the brain generates this structure gives us the illusion of "meaning".
Mathematically, the structure we are talking about here can be seen as a collection of subsets of a partially ordered set (poset) of "pieces" of given information. In the example above, this would be the poset of intervals of the musical piece. In the picture, these intervals are continuous bars. The set of bars of the same color constitutes one subset. What is extraordinary in this example is the organization of these subsets into partitions of the entire piece (one partition for each line of bars in the picture, so four altogether). Another interesting phenomenon is that bars of the same color always occur in the same line. I do not know to what extent these rules are universal to musical compositions (of a certain type?).
As for applications of the study of the structure of information, well, if "meaning" can be reduced to "structure", then by embedding structure into artificial intelligence, we should be able to produce a machine that is more human-like. This feels scary, I know, but I hope that my theory has a sufficient amount of flaws that it will not bring us closer to the terminator judgment day anytime soon.
Another possible application is in education: by identifying and emphasizing the structure in learning, the brain of a learner may be able to acquire the skill/knowledge more efficiently.
And perhaps, there can be applications in psychology too, where structure can be a key in helping a brain make sense of life experiences...