A singleton is a set having exactly one element. For instance, {R} is a singleton, where R is a rose. Now, we do want to think of a rose R as a different object to the singleton {R}. These objects even have different types. The first is a plant, and the second is a set. Here is an illustrative analogy: a rose is not the same thing as as a vase with a rose in it. 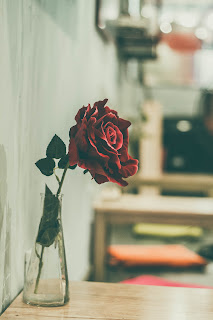 Consider again the set {R}. Is there a way to partition this set? Recall that during partitioning we arrange elements of a set in classes. Since a class cannot be empty (the third axiom for partitioning), there is only one class that can be formed, the class consisting of the unique element of the given set, so it is the class {R}. What is the corresponding quotient? Well, a quotient is the set of all classes formed during partitioning. Since there is only one class that can be formed, we get that the quotient is the singleton {{R}} (elements of the partition must be the classes). So if V={R} then the singleton of V is its quotient {V}={{R}}, which happens to be the only quotient that V={R} has.

Exploration 3.2. How many quotients does the empty set have? Is the quotient of the empty set {} the singleton {{}}? Revisit the axioms for partitioning to get help with answering this question.